Buy the Paperback at Amazon. com

Shakespeare wrote this scene in iambic pentameter, and that structure is recreated here in more contemporary English. Though more modern, the translation looks and sounds like Shakespeare's verse. 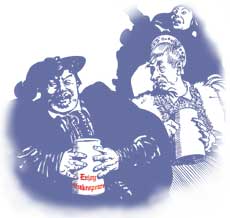 Buy the Paperback at Amazon.com

Much Ado About Nothing

Much Ado About Nothing

Laertes has received permission from King Claudius to return to France. As he prepares to leave, he gives advice to his sister Ophelia. His father enters and gives instructions to both his children.

Shakespeare uses blank verse (unrhymed iambic pentemeter) throughout the scene except for several short lines and one rhyming couplet. This translation preserves the blank verse and the deviations from it.

My luggage has been placed aboard. Farewell.

And, sister, when the winds are favorable

And letters can be sent, don't be remiss,

But let me hear from you.

Of course you will.

And as for Hamlet's frivolous attention,

A violet in the early days of bloom,

Too soon, not permanent, and sweet, not lasting,

The whiff of some diversion for a moment,

No more than that?

The body's crescent moon not only grows

In might and bulk, but as it waxes full,

The inner temple of our mind and soul

Expands as well. Perhaps he loves you now,

And his intentions as of now are pure

And not stained by deceit, but you must fear

That his intentions, owing to his rank,

Are not the main consideration here.

He can't, as ordinary people do,

Fill his own plate because his choice affects

The safety and the health of this whole state.

And thus to make his choice he'll have to seek

The vote and the approval of the body,

Of which he is the head. So if he says he loves you,

It's wise not to believe this all that much

Since he from pressure due to class and rank

Can only keep his word to the extent

That he has Denmark's general approval.

Consider then what loss your honor may sustain

If you with ears too trusting hear his songs

Or lose your heart or open your chaste treasure

To uninhibited demands from him.

Fear it, Ophelia, fear it, my dear sister,

And fall back to the rear of your affections,

Beyond the range and danger of desire.

The wariest maid seems reckless if she does

No more than show her beauty to the moon.

Virtue itself is not spared slander's lash.

The larva wounds the infant buds of spring

Too oft before their petals are displayed,

And in the bright and dewy morns of youth,

Contagion is at its most threatening.

Be wary then; the best defense is fear.

Youth harms itself, though there's no danger near.

The essence of this lesson shall become

The watchman of my heart. But, my good brother,

Do not, like some priests do who've been disgraced,

Show me the steep and thorny way to heaven,

You tread the primrose path of pleasure-seeking,

Ignoring your own guidance.

No fear of that.

I've stayed too long. But look, our father's coming.

A second blessing is a second gift.

Still here, Laertes? Shame on you! Get going!

The wind is building up behind your sails;

They're waiting for you. [lays his hand on Laertes' head] There—you have my blessing.

I have a few instructions you should etch

Into your mind. Don't give away your plans,

Or carry out a half-considered one.

Be friendly but by no means undiscerning.

The friends you make, whose worthiness you've tested,

Secure them to your soul with hooks of steel,

But don't make your palm numb by welcoming

Of joining in a quarrel, but once you're in,

Your foe should wish he'd been the one more wary.

Give every man your ear, but few your voice.

Hear all opinions, but reserve your judgment.

Don't skimp on clothing if you have the means,

But no elaborate trimmings (rich, not gaudy)

And those in France of highest rank and station

Are quite adept at judging class from that.

Neither a borrower nor a lender be,

For often both the loan and friend are lost,

And borrowing dulls the edge that trims expenses.

This above all: to your own self be true,

And it will follow, as the night does day,

That you will not be false to any man.

Farewell. These words will ripen with my blessing.

Most humbly do I take my leave, my lord.

Go, now. Time's up. Your servants—they are waiting.

What I have said.

I've locked it in my memory,

And you yourself will keep the key.

What's this, Ophelia, that he said to you?

Since you insist, his words concerned Lord Hamlet.

Some private time with you, and you yourself

Are quite accepting of his company.

If this is so—as I've been led to think,

And as some sort of warning—I must tell you

You lack a full appreciation of

What's fitting for my daughter and her name.

What is between you? Let me hear the truth.

He recently has tendered offers of

His passion for me, lord.

His passion! Pooh! You speak like a green girl,

Unschooled in dealings perilous as these.

Do you accept this tender, as you call it?

I do not know, my lord, what I should think.

Goodness, I'll teach you. Realize you're a baby,

No silver in it. Tend more to yourself,

Or we'll be served—I didn't mean to run

This horse so hard—a fool who's nice and tender.

My lord, he has persisted in his love

You see it then as fashion. Seriously!

And he gives credence to his words, my lord,

With nearly every holy vow from heaven.

Of course, to snare a clueless bird. I know

When blood burns hot, how lavishly the soul

Give off more light than heat—both vanishing,

Their promise gone while they're still being made.

Do not take them for fire. So from now on

He offers is a call to talk. Lord Hamlet?

Here's what you need to know— that he is young,

And walks around on a much longer leash

Than we have given you. In short, Ophelia,

Do not believe his vows; they're go-betweens,

A different color from the clothes they wear,

No less than pimps who press his wicked suits,

Speaking in tones of soft sincerity,

The better to beguile. I'll just say this:

Let you disgrace a minute of your leisure

By writing to or talking with Lord Hamlet.

I mean this. It's an order. Come along.

I shall obey, my lord.

Buy the Paperback at Amazon. com